Report on the long-term sustainability of public finances in Switzerland

Fiscal policy increasingly has to deal with the challenges of the future. The Confederation's budget and financial plan do not take long-term developments into account. Consequently, the Confederation needs a tool that allows for a long-term view. The long-term sustainability report examines the implications of foreseeable demographic trends for Switzerland's public finances in the long term.

The third issue, which looks ahead as far as 2045, was published in April 2016. If demographics, migration and the economy develop as assumed in the long-term sustainability report, there will be an additional burden for the public finances due to increased expenditure for AHV and healthcare. If the 2020 retirement provision reform is implemented as envisaged by the Federal Council, the Confederation will have less leeway than the cantons and the communes.

An updated edition based on new demographic scenarios of the Federal Statistical Office will be published in 2021.

The long-term sustainability report is based on certain assumptions regarding population development and economic growth. It shows the trend for receipts and expenditure through to 2045 if no measures are taken at a political level. However, the latest long-term sustainability report takes account of the Federal Council's 2020 retirement provision reform proposal. The population scenarios of the Federal Statistical Office (FSO) and the calculations of the Federal Social Insurance Office form an important basis in this regard. 2045 was chosen as the time horizon because most of the repercussions of the ageing of society are likely to be reflected in the public finances by then. Furthermore, the demographic scenarios calculated by the FSO have the same time horizon.

The report does not seek to predict the future. It provides "if... then..." statements which are subject to a degree of uncertainty. If no action is taken and the assumptions prove true, financing gaps will occur. The long-term sustainability report shows that economic growth and migration are important influencing factors for the extent of demographically induced additional burdens on public finances. The extent of the additional burdens differs according to the assumptions made for migration and economic growth.

Increase in government expenditure and debt

In the baseline scenario, demographic-dependent expenditure for the general government sector increases from 17.3% of GDP in 2013 to 20.8% in 2045. Almost half of the increase, i.e. 45%, is due to higher expenditure for healthcare and long-term care. Approximately 37% of the additional burden is due to additional expenditure for old-age and survivors' insurance (AHV) and disability insurance (IV). The remainder is due to the education sector. When the additional burden is distributed among the individual levels of government, it is clear that there is less leeway at the level of the Confederation than at the level of the cantons and communes.

Consequently, the debt ratio would rise from 35% of GDP to well over 59% over the projection horizon. At the same time, the debt ratio of the Confederation drops from 17.2% to 7.2% over the projection horizon and that of the social security funds goes from 0.7 to -4.5%, and there is even an increase in assets in the case of the social security funds. By contrast, the debt ratio of the cantons increases from 9.6% to 36.5% and that of the communes rises from 7.6% to 20.1%.

The fiscal gap shows the need for action in order to prevent the debt ratio from rising above the 2013 level in 2045. The fiscal gap for all government units is 0.9% of GDP in the baseline scenario. This means that annual savings or additional receipts of 0.9% of GDP would be required to stabilize the debt ratio at the 2013 level. The fiscal gaps for the cantons and the communes amount to 1.1% and 0.5% of GDP, respectively. The need for action in the cantons and communes is due to the high expenditure pressure in the healthcare and long-term care sectors. In contrast, the Confederation and the social security funds have negative fiscal gaps of -0.4% and -0.2% due to the 2020 retirement provision measures and the decline in IV expenditure. However, further measures will be required after 2030 to ensure the sustainability of AHV finances.

The updating of the report on long-term sustainability has been postponed by one year due to the COVID-19 crisis. The next edition, based on new demographic scenarios of the Federal Statistical Office, will be published in the fourth quarter of 2021. 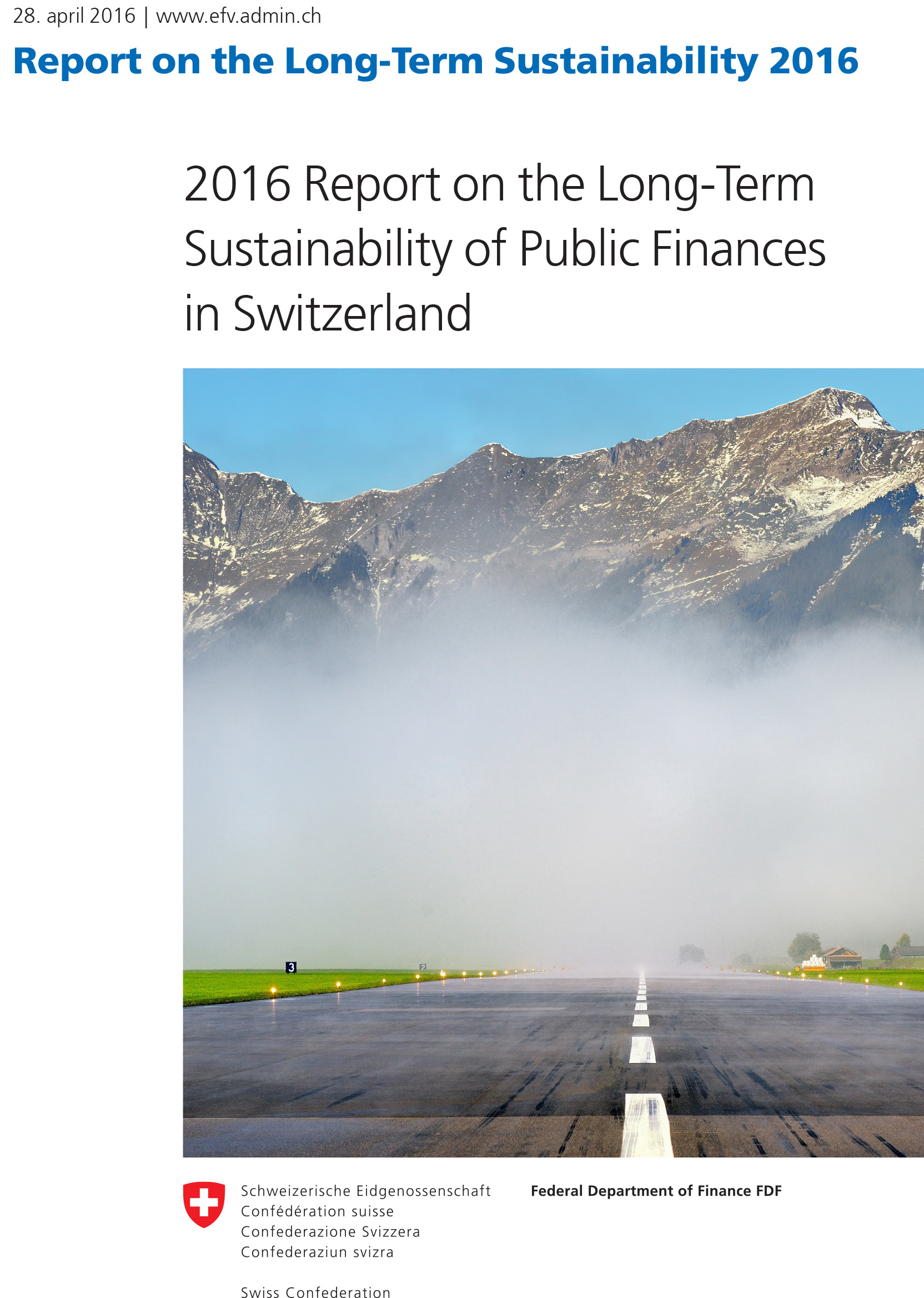 The Federal Department of Finance provides the basis for sustainable financial planning. The publication of the long-term outlook is appearing for the third time.