The Confederation, communes and cities are strengthening cooperation on setting up and managing "digital public services". In this regard, the Federal Council and the Plenary Assembly of the Conference of the Cantonal Governments of Switzerland (CCG) agreed on a comprehensive project at the beginning of April 2020. Existing staff and financial resources should be combined in a new joint organisation to ensure more effective use and accelerate progress in the digitalisation of public services. On 11 and 25 June 2021, the Federal Council and the cantonal governments approved the implementation in principle of Digital Public Services Switzerland in accordance with the framework. The new public-law framework agreement still needs to be ratified by the Federal Council and the cantonal governments by the end of 2021, in order for Digital Public Services Switzerland to go into operation from January 2022.

At the end of August 2020, the Federal Council and the Executive Committee of the CCG appointed Mr Peppino Giarritta as digital public services officer for the Confederation and cantons. He took up the position on 1 March 2021. He leads and is responsible for the development of digital public services (DPS) and will manage the DPS office, which is administratively part of the GS-FDF.

During its meeting on 11 June 2021, the Federal Council took note of the principles for implementing Digital Public Services Switzerland as of 1 January 2022 and approved the implementation in principle in accordance with the available documents. In order to accelerate the development of infrastructures and basic services for the handling of electronic processes, the Federal Council decided on additional funding totalling CHF 15 million for 2022 and 2023 to finance the planned "DPSS national infrastructures and basic services" agenda. The cantonal governments likewise expressed their opinion on Digital Public Services Switzerland at the Plenary Assembly on 25 June 2021. They also fundamentally agree with DPSS implementation in accordance with the principles.

The project organisation, which is supported by the FDF and the CCG, will finalise the framework agreement in accordance with the consultation results and submit it to the Federal Council and the cantonal governments for adoption in the autumn.

Since 2008, the Confederation, cantons and communes have been working together to establish digital public services in Switzerland. For this purpose, they have defined a joint eGovernment strategy; implementation is coordinated by the tripartite organisation eGovernment Switzerland. Other organisations such as the Swiss Conference on Informatics (SIK/CSI) or the eCH standardisation association promote the use of information and communication technology in public administrations. As a result, in recent years the Confederation, cantons and communes have laid a great deal of groundwork and set up a large number of electronic government services.

In an international comparison, the digitalisation of services and processes in Swiss public administrations is proceeding rather slowly. In addition, new challenges are emerging, such as the once-only principle in data management or the widespread automation of administrative procedures. The Federal Council and the CCG therefore take the view that it is necessary to better coordinate activities across the three levels of government in a new organisation. At the beginning of April 2020, they issued the mandate for the phased creation of this new organisation.

In the first phase, running until 2022, a political platform is planned as a standard development, without any powers as yet, but with a broad mandate and the right to make proposals. The second phase will see a political platform which will set binding standards in areas such as data management. In the third phase, an authority will be set up, with a broad mandate and associated powers. At the end of each phase, the Federal Council and the Plenary Assembly of the CCG will assess what has been achieved, and decide on the next phase. 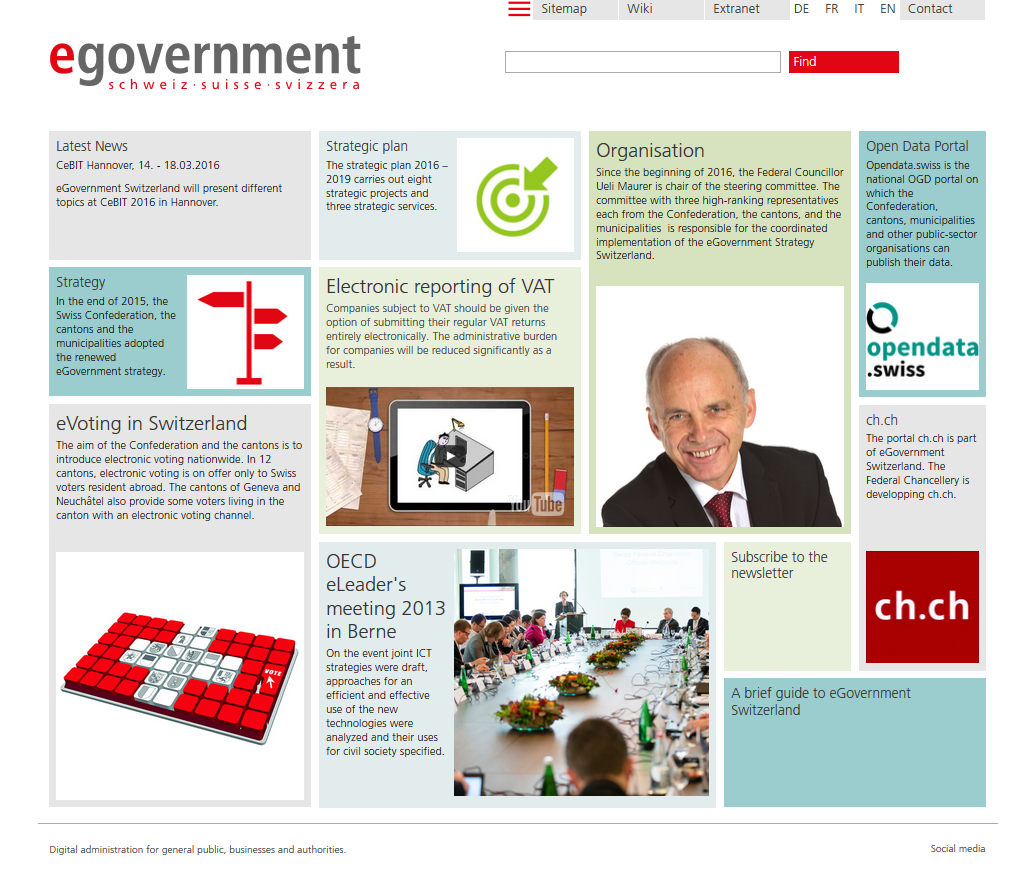