Report on the long-term sustainability of public finances in Switzerland

Ageing and climate change are long-term challenges for public finances. Therefore, an instrument that goes beyond the budget and financial plan is needed to ensure a sustainable fiscal policy. The long-term sustainability report shows the implications of currently foreseeable demographic trends for Switzerland's public finances in the long term.

The fourth issue, which looks ahead as far as 2050, was published in November 2021. If demographics and the economy develop as assumed in the long-term sustainability report, there will be an additional burden for the public finances due to increased expenditure for AHV and healthcare. Measured against the outlined period of 30 years, the expenditure to deal with the COVID-19 crisis will have only a relatively minor influence on the development of public finances. For the first time, the report presents a qualitative analysis of the potential impact of climate change on public finances. It also shows the long-term implications of the government expenditure to deal with the COVID 19 crisis.

The long-term sustainability report is based on certain assumptions regarding population development and economic growth. It shows the trend for receipts and expenditure through to 2050 if no measures are taken at a political level. The population scenarios drawn up by the Federal Statistical Office (FSO) and the calculations of the Federal Social Insurance Office form an important basis. The 2050 time horizon was selected because the main effects of ageing are likely to be reflected in the public finances by then and the FSO demographic scenarios have the same time horizon.

The report does not seek to predict the future. It provides "if... then..." statements which are subject to a degree of uncertainty. The report assesses the sustainability of public finances under the assumption that no political measures are taken and the assumed demographic and economic developments take place. In order to capture the uncertainty surrounding the COVID-19 crisis, the current report presents two scenarios, one positive and one negative.

Increase in government expenditure and debt

In the positive scenario, demographic-dependent expenditure for the general government sector increases from 17.2% of gross domestic product (GDP) in 2019 to 20.1% in 2050. The cost driver for the Confederation and social security funds is AHV expenditure triggered by ageing. With the retirement of the baby-boom generation up to the mid-2030s, the biggest increase is through to 2035, despite the assumed AHV 21 reform. Demographic-dependent cantonal expenditure is determined by healthcare and education. After 2035, healthcare and long-term care are the key expenditure drivers.

Description of the chart

Development of the debt ratio between 2019 and 2050 (the figures refer to gross debt as a percentage of GDP):

The fiscal gap shows the need for action in order to prevent the debt ratio from rising above the 2019 level in 2050. The fiscal gap for all government units is 0.8% of GDP in the baseline scenario. This means that annual savings or additional receipts of 0.8% of GDP would be required to stabilise the debt ratio at the 2019 level. 1% of GDP corresponds to CHF 7 billion in the baseline year of 2019. Notwithstanding the added burden of the COVID-19 crisis, the Confederation can just about maintain a sustainable fiscal policy, with a fiscal gap amounting to 0.1% of GDP. The cantons have an annual fiscal gap of 0.2% of GDP up to 2050 due to the expenditure pressure on healthcare.

This is relatively low, not least because of the assumed profit distributions by the SNB to the cantons. The greatest need for action concerns the AHV, which has a fiscal gap of 0.5%. Further-reaching reforms than the AHV 21 reform will also be needed towards the end of the 2020s to ensure sustainable financing for old-age and survivors' insurance. Moreover, healthcare measures will be required.

Climate change will put a strain on public finances

The current report addresses this issue for the first time. Lower receipts, e.g. from mineral oil tax, and additional expenditure to remedy climate damage, for instance, are likely to result. However, the consequences of climate change are a lot harder to gauge than the effects of ageing. For a fiscal policy that is geared to the long term, it is important to take the effects of climate change into account in decision-making and to use the most effective possible economic policy instruments to achieve climate goals.

Next update: The long-term sustainability report is published regularly as part of the planning for the legislative period, taking the Federal Statistical Office's next edition of new demographic scenarios into consideration. 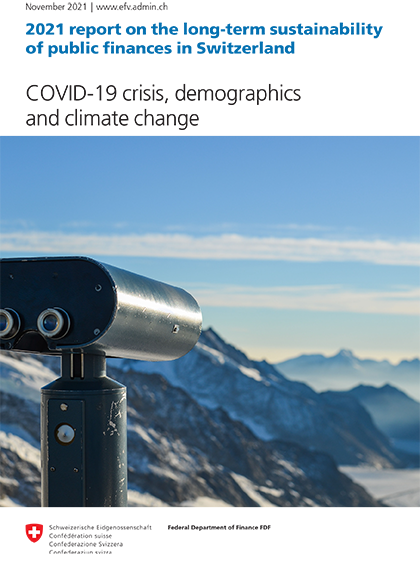 The Federal Department of Finance provides the basis for sustainable financial planning. This is already the fourth edition of the long-term sustainability report.